Part number is 21692.  Found a listing for it but it is sold out.  Recording this hear to make the search easier in the future. The pinion 21492 is also with a bracket. 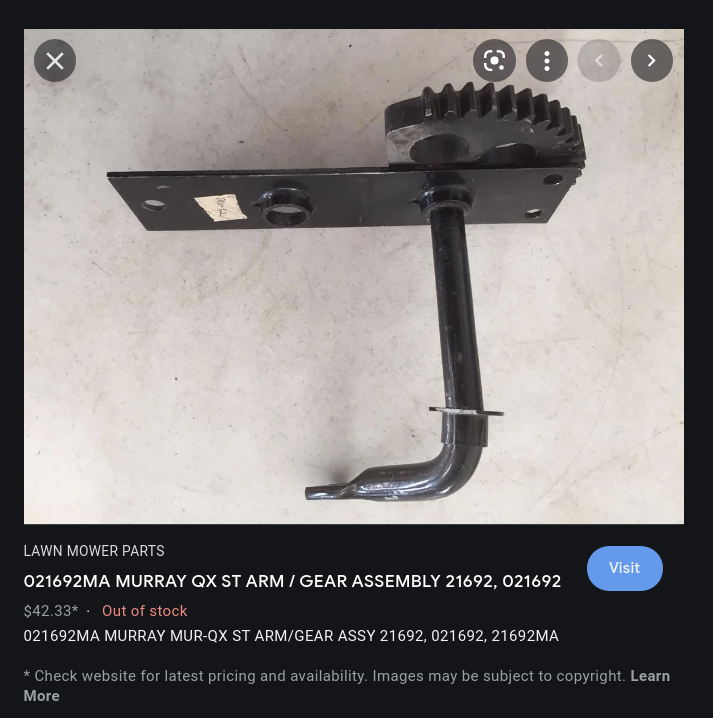 This is the DR Trimmer   Model 64020 acquired in July of 2019.   Unlike most of the other power equipment I use this one was purchased.   It uses the same engine as the trash picked push mower we use around the yard.  It has its own story which I will relate in another post.

Had not used it much as I did not have string for it.   Purchased a spool of  (fill this in)  early summer.  The thing worked for a few hours then stopped.   The carb had the white deposits. Cleaned the carb but used one I had cleaned and stored earlier, looked identical.  But this only got another hour out of it.   Cleaned the jet, fuel tank and installed one of the clear plastic filters with the paper filter element.

That worked up till yesterday.   It just stopped while running but not in use.   Figured it was the fuel filter.  Pulled off the air cleaner and it was solid with green plant dust.  They may have been the cause.   But I had already loosened the nut on the fuel bowl so I swapped out the jet for one I recently clean.

What was wrong?  Most likely the poor thing was starved for air.   Either that or the jet plugged which is possible but unlikely with the paper fuel filter.

Another problem with this machine is that it throws its strings.   The string is installed as shown in the following image. 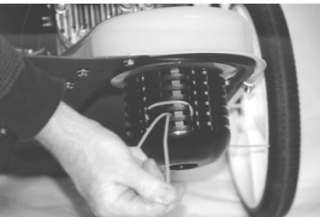 The strings are supposed to be cut to 23 inches.   I found that making them a bit longer and then tying a knot in the strings where they exit the mow head generally keeps them in place up till everything up to and including the knot is gone.

It could well be that DR Trimmer brand strings/line will work better.

Seems I have been ignoring this blog.   The foundry stuff have moved to https://nmlfoundry.blogspot.com.

It is mid August 2021 and the weeds on our 2 acres have gotten away from me.

The DYT4000 has a blow head gasket since last year.
Have the DR Trimmer working but stops after a while seems to be overheating.   May take it down to the car wash and clean the fins.  They are open but may have a coating of weed goo that is insulating.

The BX has several small hydraulic leaks but they add up and at $60 the hydraulic fluid gets expensive.  A while back I started changing the old leaky quick connectors for the loader with new ones that are incompatible with the old.  Still have one connector that has not come loose.  Thinking maybe cut slits in it with the dremel and peel it off.  But it also looks like the hose end where the quick connector screws on is bad.  So will try to get it off on the other end and replace the hose too.

The old push mower has not been working.   Spark problem.   Thinking next step is to pull the new coil again and file the coil mounting posts down to new metal.

Update:
The DYT4000 head gasket was good.  Should have done a leak down test.  Now it does need a head gasket.  Have 2 gaskets in stock but are the wrong number.   Not sure what that is about.

On the BX replaced the 3 steel lines that connect to the loader.  Removed the line with the stuck connector and put it in the vice.    There is still one connector to chance on the loader.  It is still leaking under the floor pan.  Oil on the radiator screen.

The mower works great after freshening up the coil mount posts!

Thinking about putting this engine on the sand muller.
Say we run the engine a 2000 RPM
The 6:1 output is 333 RPM
A 10:1 right angle gearbox would result in 33 RPM which is about right IIRC.  Need to look.
But I don't see an affordable gearbox.
So a mule drive would do the right angle thing.     Maybe some of the reduction too.
Need to look back at the earlier work I did on the muller in the Foundry blog.
Not seeing much advantage as complexity is similar.
Well at least I got the model number figured out.

It a gas engine is the choice a vertical shaft engine would be the way to go even if it needs one more belt.  Not fond of using a mule drive.  And 8 HP is over kill.   There is a small electric start mower in the junk that might be a better choice.

Craftsman GT is in the shop

Moved the Craftsman GT into the workshop today.
Thinking I will steal the from the silver LT1000.  Its a 21HP Intek.
Another possibility would be to use a oppy but I don't have a vertical in good condition and don't want to mess with converting the good horizontal to a vertical.

I was worried that the mule drive was not there but it and the belt are still on the tractor. One of the rear tires has a serious leak.  The tranny is a hydrostatic which is great for yard tugs.

Need to figure out how to wire up a Intek in place of a kohler twin.

Got tired of walking around it and put it back into storage..... 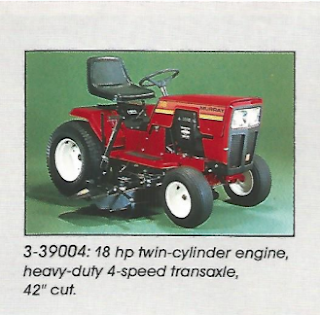 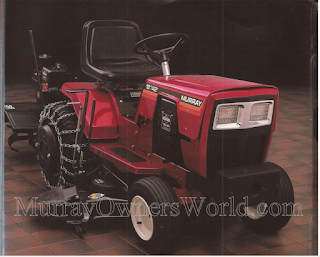 Need to get working on this baby 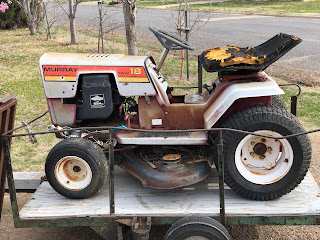 Located a milling machine in Ohmaha NE.   Have not ID'ed it so I don't have a weight.  But it has a 48x10 or so table so it will be a bit of a load.  Only senseable way to go after it is with the car trailer.  But it has a broken spring.  So I looked into new ones.

The places on the net say to measure between the eyes.  Well it came out to 27" and such springs exist but are not plentiful.   Meaning they are a bit more money.

But after a bit of thinking I realized that he center pivoting bit is pivoted due to the  flattening of the old springs.   So I am guessing that the more common 25 1/4" springs are the ticket.

But having gone out and looked again I realized these are 5 leaf springs!  Good and bad.  Means its like a beefier trailer but springs are $$$.  Not quite too bad found 3000lb 5 leaf springs for $35.50 a Libra Trailer Parts. so $142 for the set.  And maybe no tax.  That means I get 12K lbs of springs.  Should be able to haul any lathe or mill on that.

Hit the suspension bolts with PB Blaster.  And rechecked that 25 1/4 springs will fit. Looks like it would.  The rear shackle moves back and forth to accommodate change in spring length.  Need to get pictures of that.

Discovered the bolts are welded to the spring perches and shackles on the back side.  Need to raise the trailer on blocks to gain access to the welds and grind them off.  One of the equalizers is hosed.  But it and the shackles are made from 1/8" plate so I should be able to make new ones.  This will also allow me to make adjustment to the shackle length if needed.

Cut off a few bolts to remove the old suspension.

1/8 is too thick for the press to bend.  Ordered an entire suspension kit.   Have the axles and fenders off the trailer.  Too windy to flip it over.  Put 2 car tires from the green town car on trailer wheels and mounted them on an axle.  Plan is to flip over the trailer and move it on this axle.

Found cheap trailer on simplyTire.com.  $63.96 each
Called them and they said the tires can be up to 3 years old.   But returns without question are on them.

Maybe it would be a good idea to fix up the engine power compressor and mount it to the pickup bed.  That way I could mount tires on the road.  Have several 15 in tires but all old. 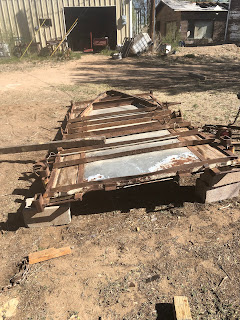 Did the trailer flip.  Working from the bottom will make it easier to remove and replace the spring perches. 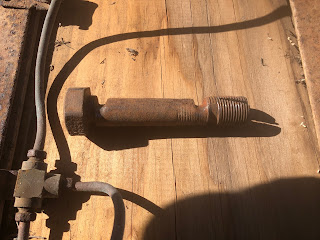 This bolt is typical of the worn out trailer suspension.

Removed the two rear spring perches.  They were looks which connected to shackles.   The new setup has both shackles on the equalizer with the front of the front and back of the back spring eyes in perches.

Too cold just above freezing.   I have acclimated to warmer temperatures.

Monday was too cold to be out.  Today, Tuesday was cold too but I did remove one of the front spring perches.   Still have the other side front and both center perches.   The centers maybe more difficult because they have a side support.  If possible I would like to retain that.

Found this site has suggestions for welding on the spring perches.
Best to weld them to a strip of metal welded to the frame to reduce stress.
https://mechanicalelements.com/mounting-trailer-axle-springs/