The tractor would not start because of a non working starter.  The guys on M.O.W informed me that it would come off without pulling the flywheel.  It did.

Fired the engine with carb cleaner and it sounded good.  Much better than the 18HP on the 14.5/42. Maybe it just has a better muffler?

Tomorrow I will take a look at the fuel system.  Maybe get it running.  Hope it does not need a motion belt too but I think that is the case.  Thinking about that I should take a look so I can get it ordered if need be. 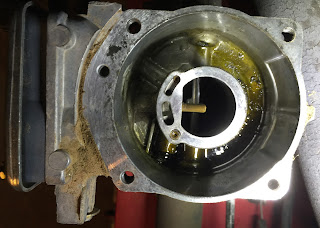 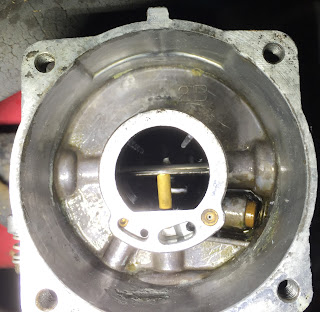 Moved on to the carb.  This carb does not look like it is 18 years old.  Pulled the top which you can do with the base still on the tractor.  Some crud in the bow.  Needle valve seems gummy.  Cleaned the bowl with carb cleaner.

Given that it had carb problem I think I will take it all the way off and run it through the ultrasonic cleaner.


Pulled the fuel pump.  One of the little springs is missing.  Time for a pump rebuild kit.
Sept 30
Adding the missing springs did not help either tractor.   So time to do a good carb clean.
Posted by 3v0 at 5:37 PM No comments:

Email ThisBlogThis!Share to TwitterShare to FacebookShare to Pinterest
Labels: Murray

Started on the gas tank.  Scrapped the JB Weld off and found a puncture rather than rust through. 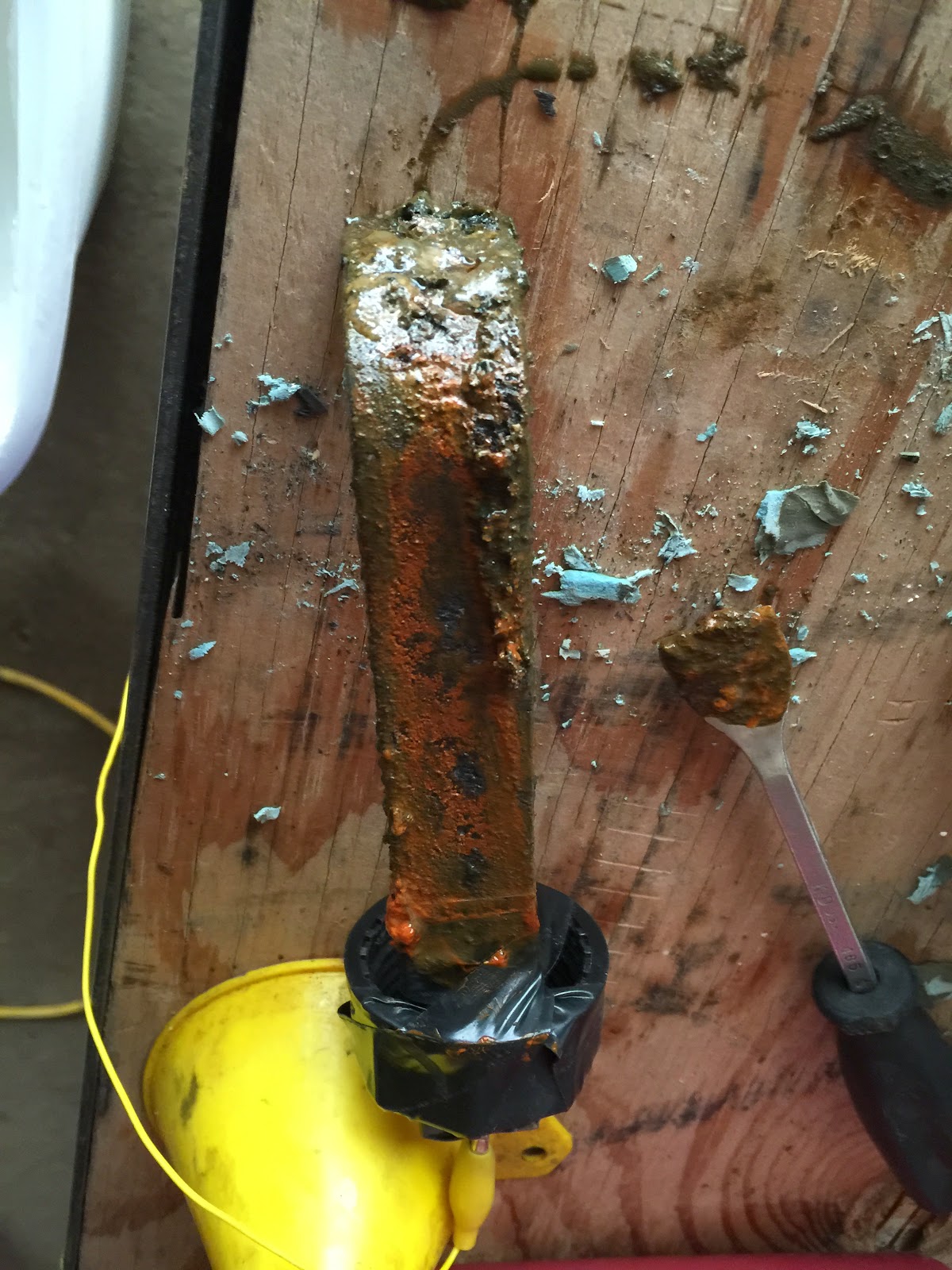 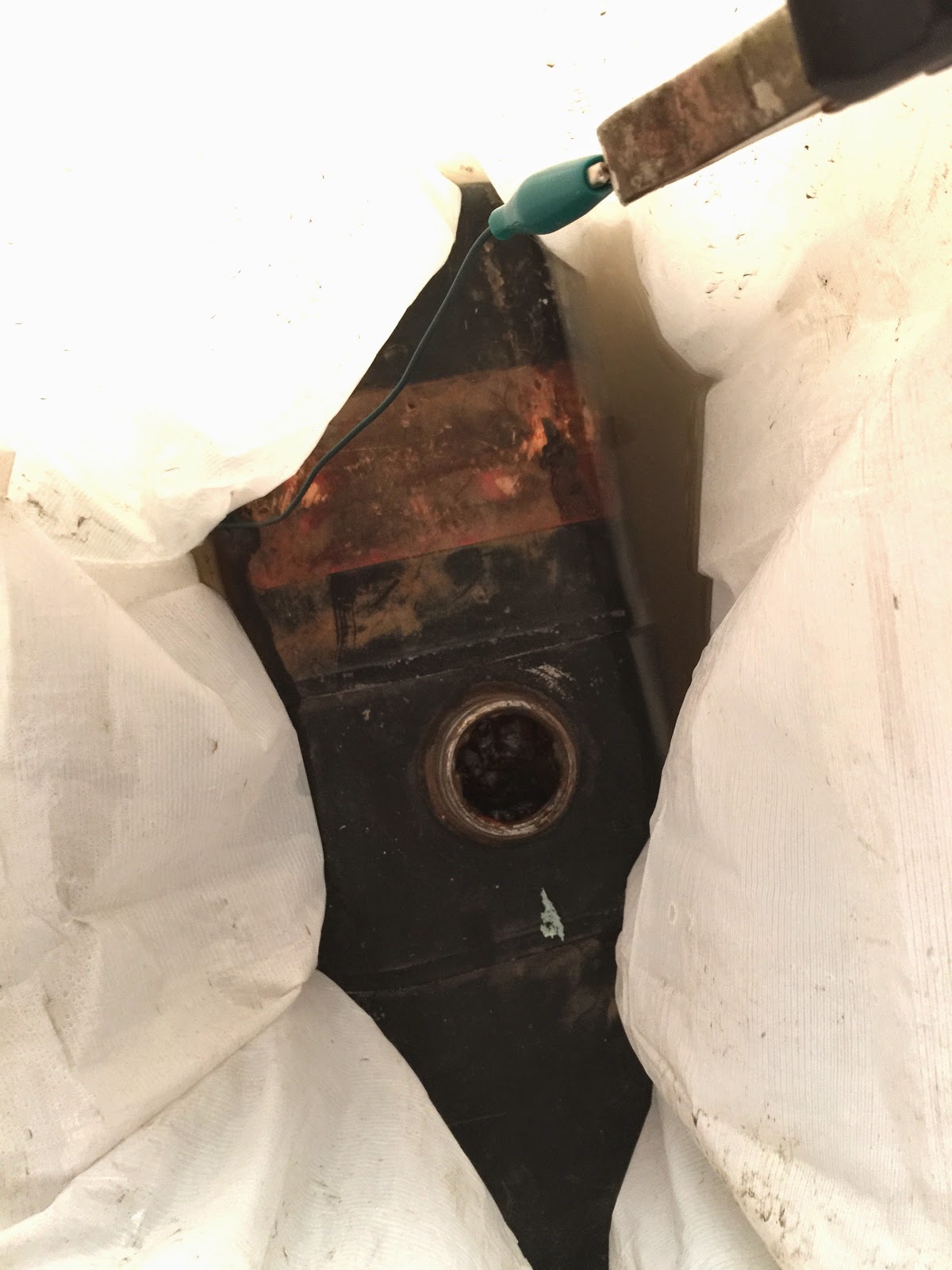 That worked well.  Also soldered the tank with lead/tin solder.

Now it needs to be cleaned to get rid of the yuk for electrolysis and coated.

Ordered 3 of these tires from TSC.  Two for the DYT4000 and 1 to mate with the one from DYT that still holds air.  This mis matched pair may be used on the Murray 46/18 if it comes to life.

I was thinking they would have been a bit stiffer but they are as flabby as most 2 ply.  Having trouble getting them to inflate once mounted.

Cut sticks to hold the sidewalls out.  After resting this way for 2 days the can be mounted.  Tried twice at one day and it did not work. 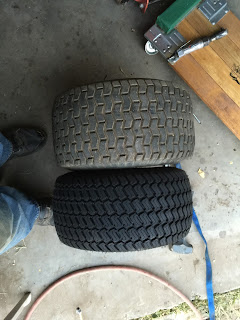 Unfortunately they are smaller than the Carsile with the same size numbers.  But still good tires at under $50 and they do say they are 4 ply. 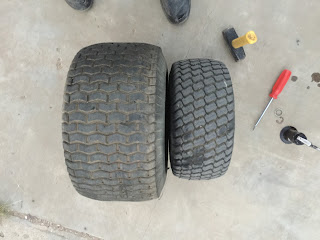 This is a comparison between the 20x10x8 Carsile Turf Master and the tires on the rear of the Murray 14.5/42. 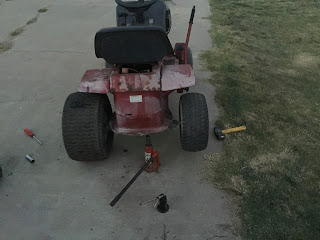 But his rear end is now making noise.  I don't recall if it started with the tire change.  Should put the small ones back on to see some time.

The transaxle has a worn axle bushing.

The transaxle input pulley is wobbly. I don't know if it is the bearing that supports the input shaft or the splines on the pulley.

If it were not for the fact that this tractor has a hood I would junk it for sure. 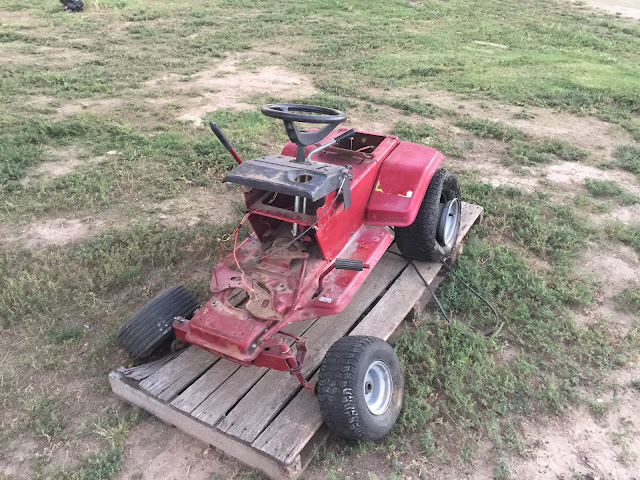 Found a hornet/wasp nest behind the 18/46's gas tank yesterday.  We killed them with spray and today I took both the 14.5 and 18/46 to the car wash.  The looked much better when wet.  Maybe a wax job some time down the road.


The 14.5 goes to the shop shown above to have its engine removed.   The 18/46 goes to the other shop with the air compressor to continue trying to remove the flywheel.   The starter has failed and need to be removed and fixed.  One bolt is under the flywheel. 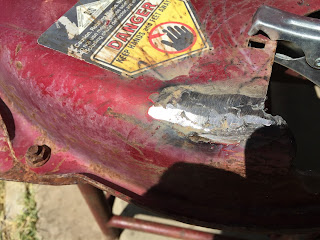 The 42 inch deck needed some welding.  Other than the damage to the edge the deck is in overall good condition including the spindles.

There was a break at the discharge chute .  A bit of hammer and dolly work put the metal back where it belonged so I could weld it.

I used the HF 90 Amp flux core for this.  Worked well considering I do not know how to weld.


Rode hard and put away wet. 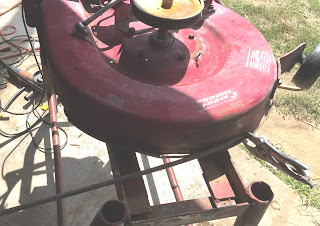 I used rebar to reestablish the edge of the deck,  To weld this I used the HF welder and should have used the stick welder.

This mower has a 42 inch deck is in fair shape but needs a bit of welding.  It has a scallop wheel near the front of the deflector and on the other side of the deck on the rear.

In the short term I intend to temporally use this deck on the 12.5/40 with the 18HP twin.  The 40" deck needs new blades and has no scallop wheels.

In the longer term.  Thinking of moving the 18HP from the 12.5/40 to this tractor.   First I need to fix the steering and test the hydrostatic transaxle.

Did the transplant to this tractor.   The 12.5/40 has transaxle trouble.   The steering problem was due to missing bolts again.  Replaced the missing axle attachment bolts with bolts and nuts. 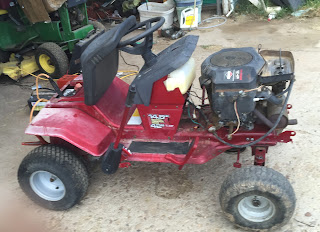 Ordered and replaced the drive belt.  At first it looked too long but today it looked OK.  Go figure.

For some reason I burned up the idler/tensioner pulley so I robbed the one off the 12.5/40.   According to the ammeter the battery is not charging.  Not sure.

Did a few test runs today.  The drive rattles a bit like maybe a bad idler bearing or maybe input shaft bearing.   Hydro works well.  Tightened up the steering sector a bit.

Pulled it over to the shop to see if I could get the back tires to hold air.   On one the cords are loose inside the tire so it is shot.   The other has cracks from sitting flat.  I got it to air up and applied pepper but doubt it will ever be a usable tire.  It only holds air for a few minutes.

I installed one of the original DYT4000 20 wheels and a peppered 18" tire that leaks down in a day or two.

Air cleaner bolt just turned so I ground the head off.   Starter only turned a small bit and hung up on the flywheel refusing to turn further.  Took the shroud off.

The flywheel is stuck.  Ruined my steering wheel puller trying to get it off.  Thinking of finding a 4 bolt version to keep it from tipping over.   Or maybe making one.

Moved this tractor to the truck to make room in the shop to work on the pickup. 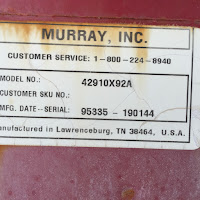 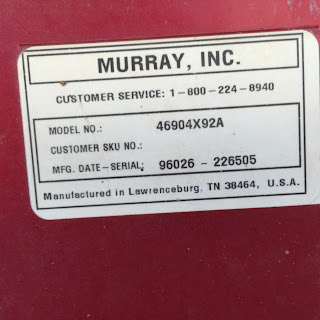 Picked up two hydrostatic Murrays.  A 14.5 HP OHV 42910X92A and a 18HP opposed twin 46904X92A.  Neither have hoods and the 14.5 is missing its seat and air cleaner.  The twin is said to run but has carb problems.  Local mower repair guy said the most recent owner is hard on equipment.

I don't know much more than that at this point.  Both engines seem to turn over and have compression. 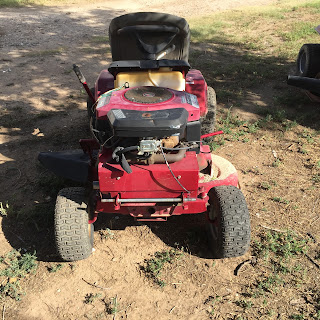 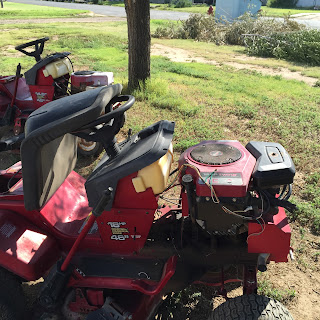 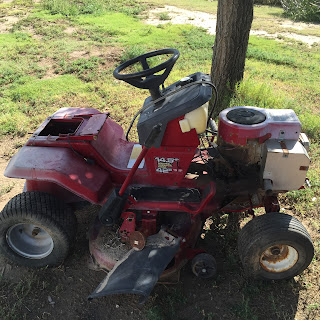 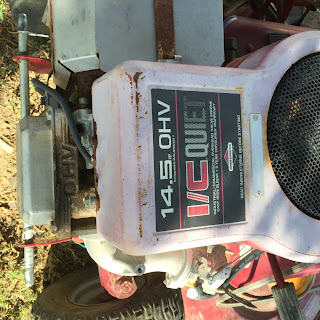 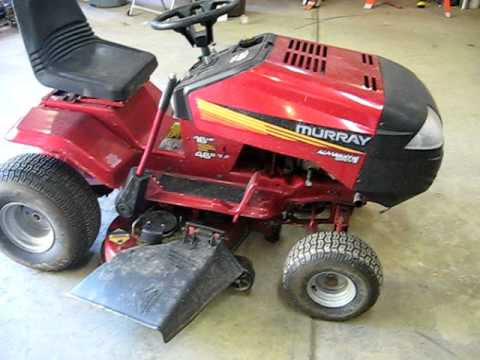 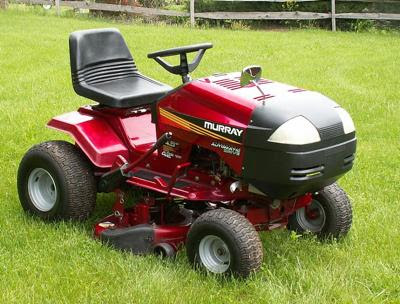